Whistle While Your Wife Works 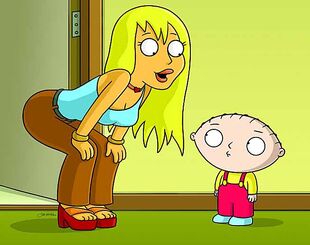 Whistle While Your Wife Works
Peter badly injures his hand while Brian gets a new girlfriend.

Plot: Quagmire comes back from Florida with fireworks. Before Peter has enough time to tell Quagmire the very long name of the firework bomb he has made, the fireworks explode, severing and scattering Peter’s fingers. Peter must then collect his fingers so that they can be reattached. 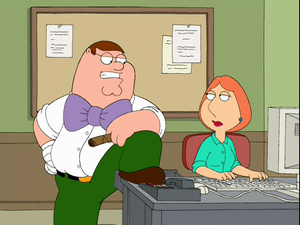 Later, it’s closing time at The Drunken Clam but Peter and crew are not ready to stop drinking yet, so they continue the alcohol consumption at the Pawtucket Brewery. Once Peter returns to work, he is scolded by his supervisor, Angela, who tells him that his productivity has waned. Peter explains that his injured hand is to blame, but Angela still says he has to improve or he will be fired. Lois comes to the brewery to help Peter get caught up at work by typing for him while his hand heals. In the office, Peter imagines Lois is his secretary and begins to sexually harass her in an attempt to convince her to have sex with him in the office. She eventually complies, and unexpectedly enjoys it. 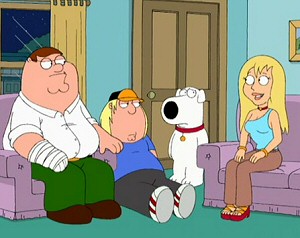 Meanwhile, Brian tells Stewie that he has been dating a girl named Jillian, but he doesn’t want Stewie to meet her. Stewie is convinced that the reason for this is that Jillian is ugly, but Brian finally introduces Stewie to Jillian to prove that she is actually attractive. Stewie soon discovers that the real reason Brian didn’t want him to meet Jillian is because she is a stereotypical "dumb blonde". Brian is teased by Lois for dating someone so dense when Stewie tricks her into coming over to the house for dinner, and Brian later admits that the relationship is based on sex and that he should end it soon. Stewie encourages Brian to break up with her, but when Brian goes to her house to do so while Stewie waits in the car, he is distracted by her nudity and ends up having sex with her instead.

Previous Episode /// Whistle While Your Wife Works \\\ Next Episode