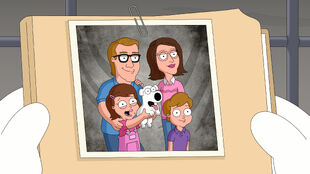 Who's Brian Now?
Brian finds out he had a previous family. 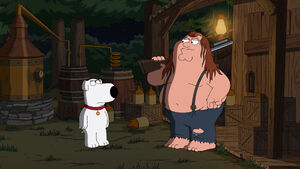 Peter needs a haircut but refuses to get one when his regular barber passes away so he lets it grows out. When his long hair begins to annoy Lois, Brian agrees to talk to him and finds him running a still. After getting drunk on moonshine, he gets lost and finds himself in an animal shelter that has already contacted the family registered on a microchip that he wasn't aware he had, but it isn't the Griffins. 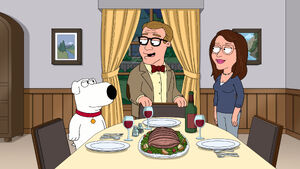 He reviews the background of his former family the Hendersons, and decides to meet with them and finds they are well-off and well-educated, in sharp contrast to the Griffins. He decides to move back in with the Hendersons, but finds he isn't treated like a member of the family as before. Meanwhile, the Griffins to try to move on without him but Peter decides to get him back. he breaks into their house and gives the Hendersons a Road House kick to the head. Joe later has to arrest Peter for breaking into the home but he lucks out when the entire jury is made up of Patrick Swayze.

Earlier in the episode, Lois mentions that Chris was taken from a Dutch family. In the final scene, that family is shown wrapping things up. As the mother signs over their stolen song and wonders if he remembers them, the father holds up their wooden footwear and puns "Wouldn't shoe?"