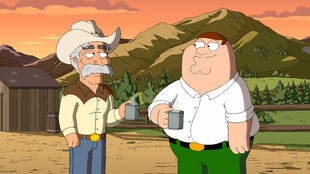 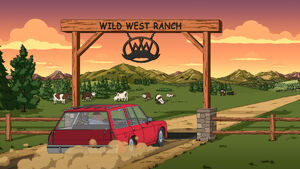 When Lois gets fed up with the town's condition after not having a mayor, she gathers a group of citizens and the town librarian volunteers for the job. However, Peter isn't pleased with this and decides to go ask the late Mayor Adam West's cousin Wild West to take the job. He is turned down at first, but West shows up on the day of the nomination and accepts, to Lois' irritation. She confronts Peter who reveals that his sole motivation is to have a man in the position, so she vows to defeat him. To try to win her over, Peter takes her out to West's farm, where his plan succeeds beyond all expectations when she become smitten with him. But when making love that night with Peter role-playing a cowboy, she calls out West's name to Peter's shock. 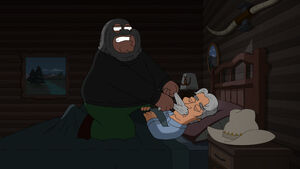 This prompts Peter to switch to the librarian's side, but he finds his work is cut out for him so he decides to sabotage West instead by cutting off his mustache but is foiled. He then tries to vandalize the library and frame West, but accidentally sets it on fire with the librarian inside. As she's caught between the fire and a crumbling ledge, West arrives to the rescue and makes good on his boast of being able to levitate to reach her. Having won the election with an extremely low turnout, he patches up things with Peter and gives him a basket of baby mustaches while asking Lois is she's ever killed a man.

To close things out, West leads the cast including numerous animal characters past and present in a song.