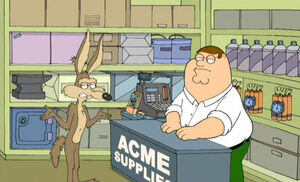 Wile E. Coyote is a cartoon character from the Looney Tunes series of cartoons, whose sole purpose in life is to catch and dispatch the Road Runner consistently and constantly failing in his efforts, of course, and receiving the injuries himself. For this purpose he purchases increasingly ludicrous and unfeasible contraptions by mail-order from the ACME mail-order supplies company.

In "I Never Met the Dead Man", he appears riding in a car with Peter Griffin, they run over the Road Runner. When Peter realizes it, he tells him that Road Runner is fine & to keep going.

In "PTV", he appears in a cutaway when Peter claims he worked for ACME. He offers a store credit when Wile E. claims a refund for a giant sling shot that slammed him into a mountain. Mrs. Coyote then appears telling her husband to hurry up.

Retrieved from "https://familyguy.fandom.com/wiki/Wile_E._Coyote?oldid=228854"
Community content is available under CC-BY-SA unless otherwise noted.