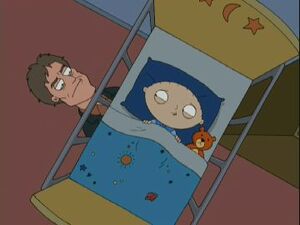 William "Willem" Dafoe (born July 22, 1955) is an American film and stage actor, and a founding member of the experimental theatre company The Wooster Group. He is best known for his roles in To Live and Die in L.A., Platoon, The Last Temptation of Christ, Shadow of the Vampire, Mississippi Burning, The Boondock Saints, American Psycho, the initial Spider-Man films and Antichrist.

Dafoe lives under Stewie Griffin's bed prior to but as seen in "Lois Kills Stewie".

Peter carves a tree stump in Dafoe's likeness with a chainsaw in "Boys & Squirrels", while Joe takes heat from the guys over his pronunciation of Willem's name.

Retrieved from "https://familyguy.fandom.com/wiki/Willem_Dafoe?oldid=227012"
Community content is available under CC-BY-SA unless otherwise noted.