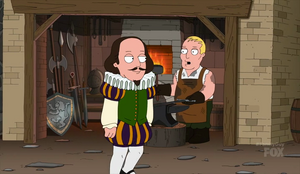 William Shakespeare (April 1564 – 23 April 1616) was an English poet, playwright, and actor, regarded as the greatest writer in the English language.

Hamlet's soliloquy from Hamlet, Act III scene iii is featured in "Total Recall" during a Shakespeare In The Park.

Chris ditches Shakespeare In The Park for 2 Broke Girls In The Park in "Peter, Chris, & Brian".

In "Road to India", Brian notes that sometimes fame brings unwanted attention, setting up a cutaway gag in which Shakespeare is given grief by the townsfolk over his ruffled collar, until he returns to the store declaring it doesn't suite him.

From observing a worn copy of Shakespeare in Dr. Cecil Pritchfield's bookcase, Stewie notes that he must have read it extensively to his gay lover/husband Michael in "Send in Stewie, Please". As he is dying, the Dr. quotes Romeo and Juliet.

Shakespeare's Romeo and Juliet is one of the stories presented in "Heart Burn". During a Family Feud gag, the Capulet's choose "Out" to go along with "Dammed spot." "Out, damned spot!" is part of a sentence from the play Macbeth, spoken by Lady Macbeth.