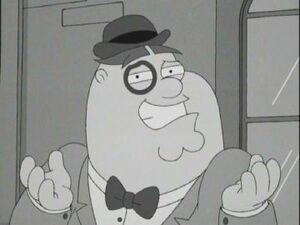 Willie "Black-Eye" Griffin was Peter Griffin's great-grandfather. He starred in several slapstick silent films back in the 1920s. He would do certain activities with his dog who resembles Brian and have hard objects hit his eye. He'd say, "Oh-oh, not my eye again!" in the silent films. He would then turn towards the camera, revealing his black eye, and shrug as the film ended with an iris out on the blackened eye. When he was in talking films, his incomprehensible voice quickly caused his popularity to plummet and he eventually died from being stabbed in a card game. He appeared in "Untitled Griffin Family History".

Retrieved from "https://familyguy.fandom.com/wiki/Willie_%22Black-Eye%22_Griffin?oldid=187412"
Community content is available under CC-BY-SA unless otherwise noted.