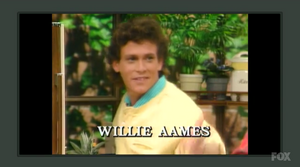 Willie Aames (born July 15, 1960) is an American actor, film and television director, television producer, and screenwriter. He played Tommy Bradford on Eight is Enough, and Buddy Lembeck on the sitcom Charles in Charge.

He appeared as Lembeck in Charles in Charge, where he was credited in the show's opening credit sequence, in an episode seen in "New Kidney in Town".