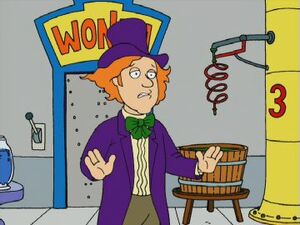 Willy Wonka & the Chocolate Factory is a 1971 film loosely based on the 1964 Roald Dahl novel Charlie and the Chocolate Factory. It starred Gene Wilder in the title role, and was directed by Mel Stuart. The film received an Academy Award nomination for Best Original Score.

Peter Griffin is portrayed in the role of Violet Beauregarde in "I Never Met the Dead Man", denying he tried Willy Wonka's three-course gum, which had already turned him into an oversized blueberry.

In "FOX-y Lady", when Lois gets a job as a Fox News Channel anchor, she runs home in a similar fashion Charlie does in the novel and film versions.

"Wasted Talent" parodies many aspects of the film including:

Meg reveals that she is aware that Peter loves Augustus Gloop and hates Mike TeaVee in "Meg Stinks!".

Brian and Stewie watch an extended director's cut of the film in "The Boys in the Band" in which, during the climatic glass elevator scene, Wonka informs Charlie that he has to "work" for the factory. When Charlie hesitates, Grandpa Joe jumps in and tells he has to do it because he refuses to get back in bed with the other three grandparents and even offers to do what Wonka suggests himself, although Wonka cuts him off, insisting that it must be a child.

When Brian and Jess have sex in the Great Glass Elevator in front of Wonka and Charlie to complete her bucket list in "Married...With Cancer", Charlie leaps out of an open window while at a high altitude.

Retrieved from "https://familyguy.fandom.com/wiki/Willy_Wonka_and_the_Chocolate_Factory?oldid=221441"
Community content is available under CC-BY-SA unless otherwise noted.