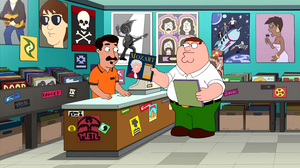 Wolfgang Amadeus Mozart (27 January 1756 – 5 December 1791) was a prolific and influential composer of the Classical era. He composed over 600 works, many acknowledged as pinnacles of symphonic, concertante, chamber, operatic, and choral music.

When one of Lois’ piano students makes an error in "Mind Over Murder", Stewie yells to him "E-flat, Salieri, E-flat!", referring to Antonio Salieri, a composer who was a rival of Mozart's.

The song that plays in the background during Stewie’s floor routine in "Peterotica" is “Rondo Alla Turca” from Mozart’s Piano Sonata No. 11, K331.

After the Griffin family loses their hair and dons 18th-century wigs in "It Takes a Village Idiot, and I Married One", Stewie and Peter parody the scene from Amadeus where Mozart mocks Antonio Salieri’s music after a disguised Salieri requests it.

During "Mr. Booze" in "Friends of Peter G", Ollie Williams finds himself unable to express himself by naming Mozart as one of his favorite composers after suffering from alcoholism, and is only able to blurt out Cher.

In "Brian's Play", the way Brian is reading Stewie's play to the background of Mozart's Symphony K.201 and letting the pages glide out of his hands is a reference to the film Amadeus where Salieri does the same with Mozart's sheets.

When Lois considers looking for work in "Peter Problems", Peter decides that it may give him time to expand his record collection. In an ensuing cutaway, he considers purchasing albums by Mozart, Johann Sebastian Bach and Claude Debussy.

Retrieved from "https://familyguy.fandom.com/wiki/Wolfgang_Amadeus_Mozart?oldid=187985"
Community content is available under CC-BY-SA unless otherwise noted.