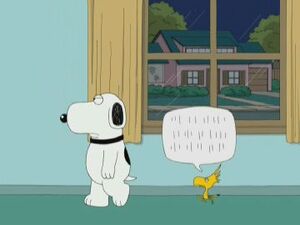 Woodstock is a fictional character in Charles M. Schulz's comic strip Peanuts. He is Snoopy's closest friend and, after Snoopy, the most recognized non-human in the strip.

At the reunion in "Mother Tucker", Charlie Brown revealed his drug addiction killed both Snoopy and Woodstock.

In "Halloween on Spooner Street", Brian is mocked by bullies and called Snoopy. The bully then asks, "Where's Woodstock?".