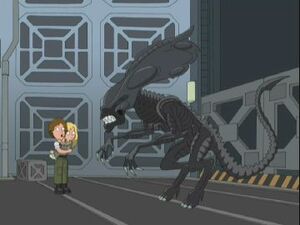 The Alien (sometimes referred to as the Xenomorph) is a fictional endoparasitoid extraterrestrial species that is the primary antagonist of the Alien film series. The species made its debut in the 1979 film Alien, and reappeared in its sequels Aliens (1986), Alien 3 (1992), and Alien Resurrection (1997). It has also appeared in the series' two spinoffs Alien vs. Predator (2004) and Aliens vs. Predator: Requiem (2007). Unlike many other recurring enemy extraterrestrial races in science fiction, the aliens are not an intelligent civilization, but predatory creatures with no higher goals than the propagation of their species and the destruction of life that could pose a threat. Like wasps or termites, aliens are eusocial, with a single fertile queen breeding a caste of warriors.

Sigourney Weaver's character, Ellen Ripley, confronts the xenomorph queen from the film in "Peter's Daughter". The queen is voiced by Mike Henry.

A Xenomorph with eyes on its face can be spotted in "Blue Harvest" during the scene in Mos Eisley Cantina.

In a television gag of the O.J. Simpson trial during the recording of a DVD commentary by the Griffin family in "You Can't Handle the Booth!", they are joined by the Xenomorph and the Predator.

Retrieved from "https://familyguy.fandom.com/wiki/Xenomorph?oldid=211542"
Community content is available under CC-BY-SA unless otherwise noted.