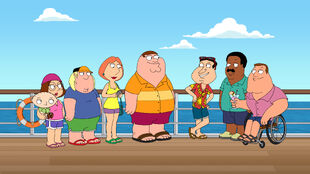 Yacht Rocky
The family takes Peter on a cruise to relax his jangled nerves. 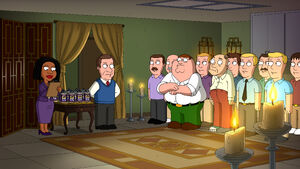 Peter's work announces that due to cutbacks they need to let one male employee go. When the final choice comes down to Peter and another employee, the former blacks out from the stress. After he awakens in the hospital, Dr. Hartman connects him with a 'Yacht Rock' music collection to help him relax. When the guys get hooked on the music as well, they learn of a Yacht Rock Cruise happening and decide to all go along. While attempting to board, Brian finds himself in a dog crate and stored beneath deck. On board, the rest of the family and Peter's friends rub shoulders with numerous stars. 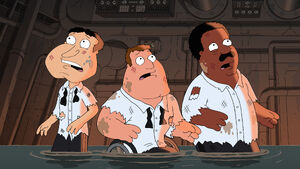 But when the ship's captain gets distracted hanging out with Peter, he leave the bridge unattended as a rogue wave capsizes the ship. Struggling to survive, has to make their way towards the bottom of the ship where the hull is the thinnest. When they finally reach their goal and meet up with Brian in the process, they realize that they have no tools to cut through the hull. Turning fearful as the water rises, the episode is resolved by simply cutting to everybody safe back at home.