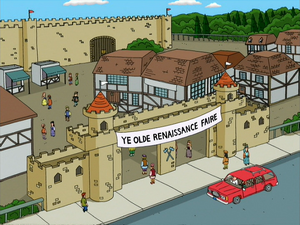 Peter Griffin accidentally found himself there when he was 18 after taking LSD, where, thinking he could fly, jumped off a Renaissance themed building where he was saved by The Black Knight. Following this event, it became Peter's dream to become a jouster.

Years later, after being fired from work, Peter eventually joins the fair in the episode "Mr. Saturday Knight" as a jouster, thus fulfilling his dream. However, the dreams were cut short during a misunderstanding involving the Knight's girlfriend, Maid Madeline. Mort Goldman worked here that same year. Tricia Takanawa did a report on the Faire in the days leading up to it, and Tom Tucker and Diane Simmons did play-by-play analysis of the jousting tournament.

Retrieved from "https://familyguy.fandom.com/wiki/Ye_Olde_Renaissance_Faire?oldid=171430"
Community content is available under CC-BY-SA unless otherwise noted.