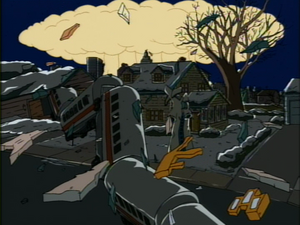 The Year 2000 problem (also known as the Y2K problem, the millennium bug, the Y2K bug, or simply Y2K) was a problem for both digital (computer-related) and non-digital documentation and data storage situations which resulted from the practice of abbreviating a four-digit year to two digits. This caused mass panic worldwide, some requiring government action. It was even believed it would cause the apocalypse.

In "Da Boom", the Y2K scare is the source of the episode's plot. A costumed man warns Peter Griffin about the dangers of Y2K on December 31, 1999. Peter locks his family up in a bomb shelter that evening. A nuclear holocaust occurs soon after the stroke of midnight, destroying much of Quahog and mutating or injuring many of the surviving citizens. The Griffins are free from mutations. When food runs out, the family travels to Natick, Massachusetts in order to find food from a Twinkie factory, beleving that they survived the explosion. On the way, Stewie is exposed to nuclear waste and later mutates into an octopus-like creature. Upon their arrival at Natick, they establish a town, dubbed New Quahog, which Peter mismanages into chaos. Octopus Stewie then begins to lay eggs. Peter is eventually kicked out of the town he founded, and his family follows him. Meanwhile, Stewie’s spawn hatch, and begin to kill the New Quahog citizens. The Griffins head off to a Carvel factory in Framingham, Massachusetts.

The events of the episode are revealed to be Pam Ewing's dream.

Stewie parodies "Y2K" in "Turkey Guys" when he compares trying to make Chris presentable for Thanksgiving guests to "Y2Gay," setting up a cutaway in which a gay man is being subjected to having two Time's Square-type balls lowered onto his head.

Retrieved from "https://familyguy.fandom.com/wiki/Year_2000_problem?oldid=171247"
Community content is available under CC-BY-SA unless otherwise noted.