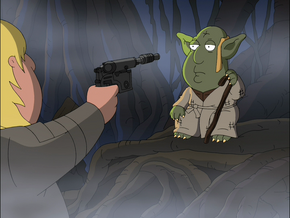 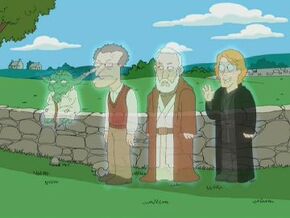 Yoda is a fictional character in the Star Wars universe. In the prequels, Yoda was the head of the Jedi Council. Yoda was responsible for much of Luke Skywalker's training in Star Wars Episode V: The Empire Strikes Back. Yoda dies in Episode VI: Return of the Jedi, at about 900 years old but appears at the end of that film and in Episode VIII: The Last Jedi as a Force ghost. He is widely considered to be the greatest Jedi of all time and trained many Jedi, including Luke.

Yoda's ghost appeared to Peter Griffin in "Peter's Two Dads", in a scene that is similar to and soon parodies that of Return of the Jedi.

Carl played Yoda in Something, Something, Something, Dark Side and It's A Trap!, resulting in Yoda's acquisition of Carl's taste in movies. In the latter of these two episodes, his full name is revealed to be Yoda Parseghian when Luke Skywalker (Chris) tries to use the late Jedi's credit card.

Retrieved from "https://familyguy.fandom.com/wiki/Yoda?oldid=224565"
Community content is available under CC-BY-SA unless otherwise noted.