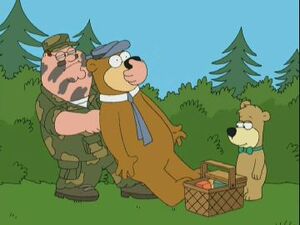 Yogi Bear is a cartoon bear created by Hanna-Barbera. Along with his best friend Boo-Boo, also a bear, they live in the fictional park of Jellystone. Yogi is well known for a variety of different catchphrases, "pic-a-nic baskets" and "I'm smarter than the average bear!" as well as "Hey there, Booboo!".

Yogi is seen in a cutaway in "Hell Comes to Quahog". Peter Griffin brutally kills him using a hunter's knife as a favor to the Park Ranger. Peter then callously tells a shocked Boo-Boo to tell the other bears what he had seen.

Retrieved from "https://familyguy.fandom.com/wiki/Yogi_Bear?oldid=217966"
Community content is available under CC-BY-SA unless otherwise noted.