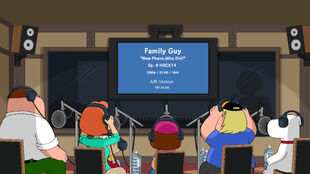 You Can't Handle the Booth!
Lois discovers that Peter is still paying alimony to a previous wife. 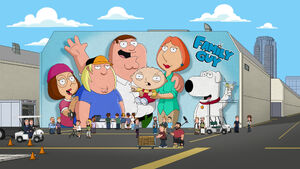 During the recording of a DVD commentary for an episode of Family Guy, paychecks are handed out and Lois discovers that Peter makes significantly more than she does due to paying alimony to his ex-wife Sarah Paulson. Sarah arrives and joins in on the commentary, which breaks down into bickering and results in Lois revealing that Philip Seymour Hoffman could possibly be Chris' father, quitting the show and leaving Peter.

Trying to carry on the commentary, they wonder if Lois will return when they are joined by Seth MacFarlane and the actual cast who reveal that they are all just characters that are performed and not real at all. Lois returns, and faced with a new reality that they don't really exist and they should make the best of what they have, patches things up with Peter and the kids. 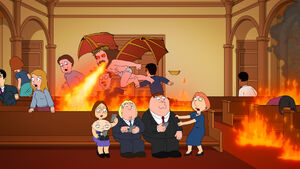 In the background episode of "New Phone, Who Dis?", Peter decides to get new Crabapple phones for the entire family to Lois' displeasure. Distracted by their phones, they completely miss Jesus Christ going berserk during Sunday services. Determined to show them a life before such distractions, she insists on taking them to Old Sturbridge Village, a colonial recreation town but Peter refuses to go by pretending to be sick and is left behind, where he manages to get his head stuck in the stair railings when he drops a meatball on his way upstairs. 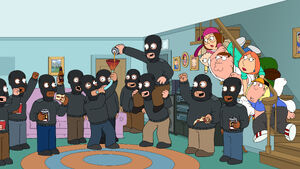 When the family returns, they give him hell for his deception, but quickly manage to get their heads stuck in the railings as well. When they think they're about to be rescued by the timely arrival of a delivery man, he turns out to be a robber casing the house, and invites several other robbers along for a party. After they leave, they try to use the voice function on the phone to call for help. After a few misfires, they manage to call for a woodworker which connects them to Quagmire and the guys who have been building a chair as a hobby. Before turning them loose, the guys cut the stairs out and mount them out in the street for everyone to see.

Previous Episode /// You Can't Handle the Booth! \\\ Next Episode

Retrieved from "https://familyguy.fandom.com/wiki/You_Can%27t_Handle_the_Booth!?oldid=216317"
Community content is available under CC-BY-SA unless otherwise noted.