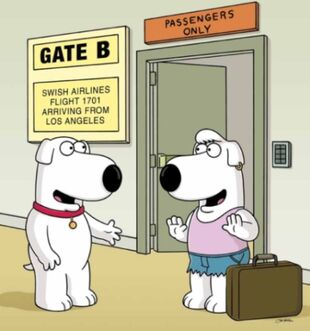 You May Now Kiss the...Uh...Guy Who Receives
When Brian's openly gay cousin visits and tells the family he's getting married, Brian has to stop Mayor West's ban on gay marriage. 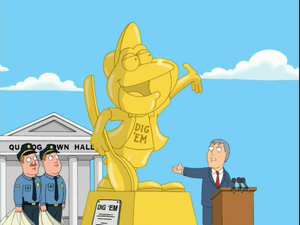 Mayor West unveils a solid gold statue of Dig 'Em, the Sugar Smacks Frog to commemorate the soldiers who have died in the war in Iraq. The town is dismayed by this waste of money and Alyssa, a pretty girl that Chris has a huge crush on, expresses her outrage to Chris. Later Chris asks her out and she invites him to her Young Republicans meeting.

Meanwhile Brian's gay cousin Jasper is visiting and announces that he is marrying Ricardo. The family is excited for them but when Brian offers the house for the wedding Lois begins to feel uncomfortable. 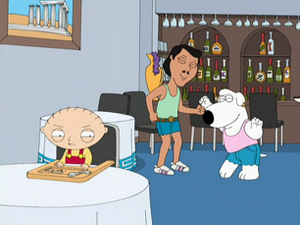 Mayor West, facing growing outrage from the town for spending the entire treasury on the Dig 'Em statue, bans gay marriage to distract everyone's attention. It works. Jasper is heartbroken and Brian decides to fight. He goes around gathering signatures on a petition supporting gay marriage. Alyssa tells Chris that if he destroys the petition she will let him touch her boobs. Meanwhile Lois is struggling with the idea of gay marriage and refuses to sign Brian's petition.

Chris burns the petition so Brian stays up all night gathering another 10,000 signatures. When he finally presents it to Mayor West, he tosses it out of the window. A desperate Brian grabs a gun from a cop and takes Mayor West hostage.

When Lois sees Brian on TV she realizes how strongly he feels and changes her mind about gay marriage. She goes down to the courthouse and convinces Brian to give himself up. Since Brian kidnapping has distracted everyone from the Dig 'Em fiasco, Mayor West tears up the gay marriage ban and Jasper and Ricardo have their wedding after all.

Previous Episode /// You May Now Kiss the...Uh...Guy Who Receives \\\ Next Episode

Retrieved from "https://familyguy.fandom.com/wiki/You_May_Now_Kiss_the...Uh...Guy_Who_Receives?oldid=216378"
Community content is available under CC-BY-SA unless otherwise noted.