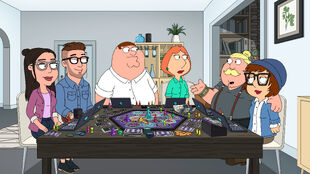 Young Parent Trap
Peter and Lois are mistaken for a younger couple. 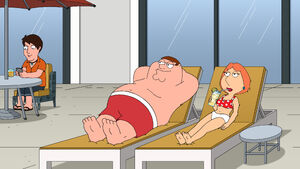 During a parent-teacher night at Stewie's school, Peter and Lois are mistaken for a young couple and spend the day out with another couple. while admiring their apartment they discover there's an empty unit with a toilet shaped like a Hungry Hungry Hippo and they quickly snap it up. Despite momentary hesitation from Lois, they decide to leave Chris and Meg alone in the old house. Chris later discovers where they're staying thanks to a report of loose meat in a swimming pool so Meg and Chris pose another young couple and move in. 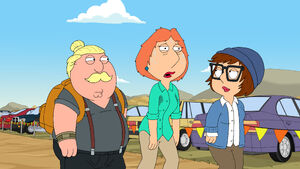 With them determined to get Peter and Lois to expose themselves, they managed to founder through as they get invited to go to a music festival. Dealing with the hassles including a lack of restrooms finally causes them to throw in the towel, but they also point out to their friends that they've been fooled by a couple of teenagers. Lois, unable to deal with Millennial life, curls up in Chris' shadow, while Peter manages to ruin his pants in the mirage of a 7-Eleven bathroom.

Meanwhile, Stewie finds all of his new playmates at the apartment complex have drowned. Chris, while running several side hustles, finds himself squeezed out of the catamaran business but goes on to motivational speaking as an uninvited guest at a nurse's convention.

Retrieved from "https://familyguy.fandom.com/wiki/Young_Parent_Trap?oldid=233130"
Community content is available under CC-BY-SA unless otherwise noted.