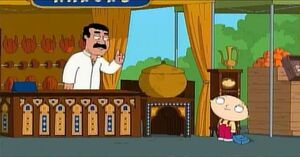 Yousef is Stewie Griffin's plutonium dealer. When he goes to the farmer's market to buy more plutonium for his time machine return pad in "The Big Bang Theory", Yousef cracks jokes about his terrorist son and wife, punctuated by playing a flute for his dancing cobra in a basket.

When Stewie attempts to rebuild his time machine after destroying it in order to save Brian in "Life of Brian", he goes to see Yousef for some of the parts, but finds out that he can no longer supply them as the original supplier accidentally drew a doodle of Mohammad and was killed.

Retrieved from "https://familyguy.fandom.com/wiki/Yousef?oldid=153872"
Community content is available under CC-BY-SA unless otherwise noted.